Last year we did the front yard, taking out the overgrown bushes that the previous owner had put up to create a buffer between our house and the crack-house across the street, and putting in a nice lawn. That went very well, and it is still looking beautiful. This year the project is the back yard.

When we moved in the backyard was a formal garden, with pathways and sitting areas, a big dahlia garden, a vegetable garden, and a flower garden. The previous owner had been retired, and he obviously spent a LOT of time working on it. It was a maintenance nightmare for a couple working folks like us. So we had slowly cut back on the formal stuff anyway, but this year the lawnmower wouldn’t start in the spring, and by the time I got a new carb for it and got it running again, things were extra out of control.

So we rented a walk-behind string trimmer, and I worked my butt off mowing it all down. I was kind of sad to see it go, because it reminded me of our pasture in spring, and I loved watching the grasses wave in the breeze.

With everything back under control, I figured it was time to begin the backyard remodel I had been planning. There were a few problems. As previously mentioned, Navi is a digger, so any gardening needed to be fenced away from her. Also, there is a plum tree in the corner of the yard, and the dogs enjoy eating the plums and chewing up the pits, which are toxic, so I had it temporarily fenced off with a dog x-pen, but it was not a permanent solution. I have this plan:

Which I have deviated from slightly as my desire to have a garden got stronger. When we lived on the farm, I had a huge garden, and I worked really hard to get better and better at it every year, and I hated to give it up when we left. This year I finally got my act together enough to put in a tiny container garden with a few tomatoes and peppers and herbs. But I would like to grow our own lettuce and greens as well. So I took the corner marked Bushes on my plan, and fenced it off to make a garden, and keep the dogs away from the plums. 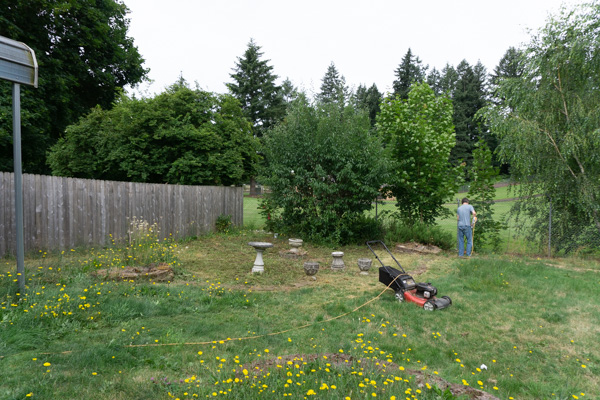 We had a lovely mild day, not too hot, not too sunny. Mowing and weed-wacking commences… 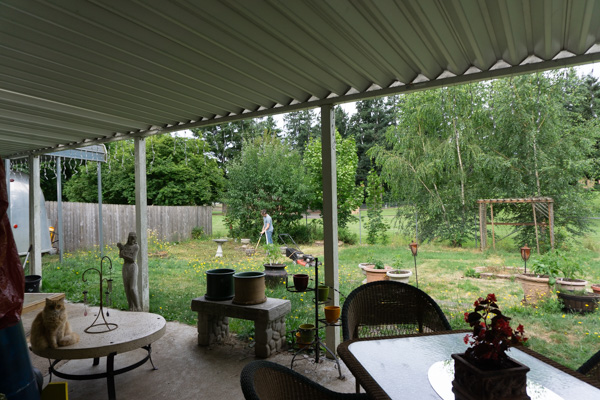 Then we went to Lowes and found a no-dig fence style we liked. They have stakes that you pound into the ground, and then slide the fence panels onto them. Tall enough to keep out the dogs, and they look nice. 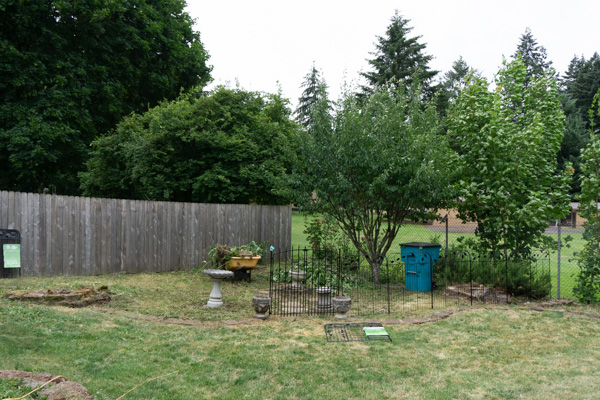 The corner already has a brick outline, but it was curved, and the fence could not curve as much as the bricks, so we made the fence line fairly straight and left the curved areas outside it for planting some bushes to soften the area up. We also got a nice no-dig gate that fit perfectly in the little entrance-way. 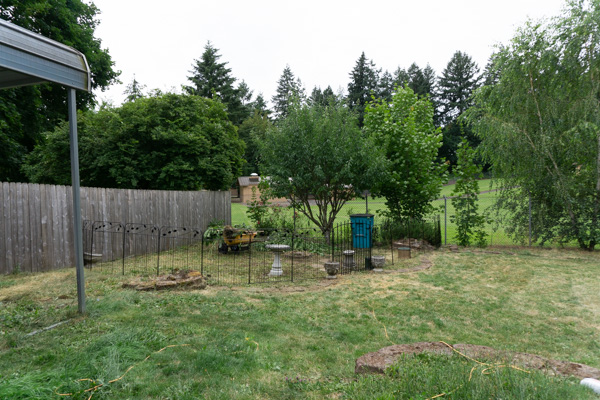 Completed. Now the dogs are unable to get to the plum tree, or any planting beds I want to put in there.

We continued mowing and trimming around the rest of the yard. 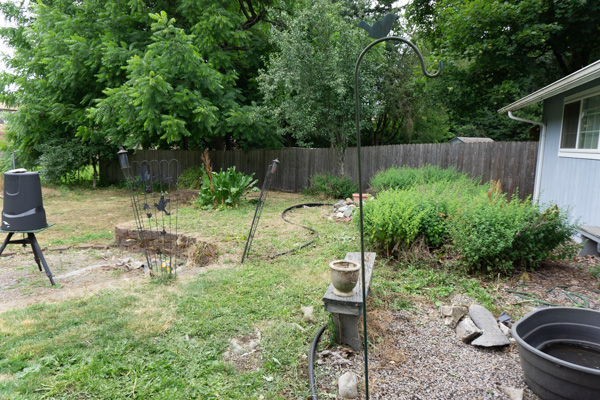 Much better! Still needs clean up, but it will get there. This is where I want a stone patio eventually.

Dave gets a well-deserved rest and smooches from Barclay ❤

The garden area has these two brick circles, one on either end. This one had a greek statue on it, and it shifted and she fell over a couple winters ago, so now she is up on the patio. I am not fond of these brick circles, they look sloppy, and appear to be full of debris – broken bricks, old tile, etc. I want to take one down and reuse the bricks to outline a garden bed.

So I started tearing the other one apart, and discovered 1) it gave shelter to the biggest spiders I’ve ever seen and 2) it was hiding a stump! I picked through the bricks one by one, brushing off spiders and tossing them into the fenced area, then arranged them into a curvy garden bed.

Leaving behind the stump, which is much less obtrusive than the brick circle had been. 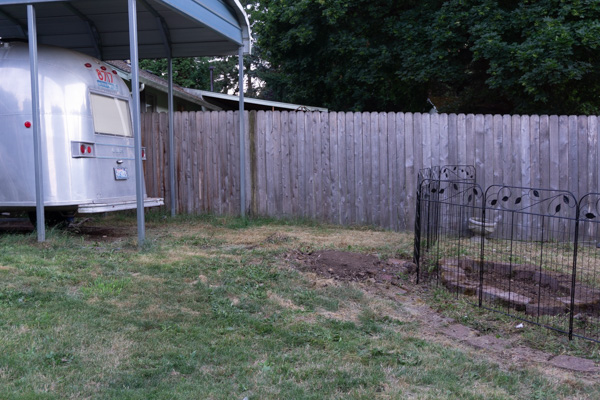 Meanwhile Navi dug holes big enough to stick her whole head in! That’s the next area to work on.

But that’s enough work for one afternoon. I stickballed Barclay until he was worn out and jumped in the tub to cool off, and called it a day.