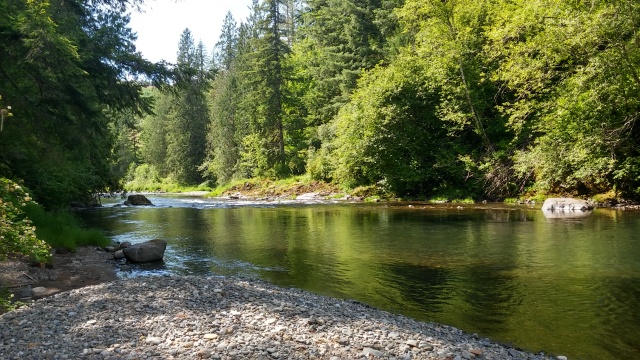 This weekend I went on my first outing with the Clark-Skamania Flyfishers group. I had a great time, learned a lot, and caught a couple fish, so overall it was a success, and I can’t wait to go again.

I only have one picture from the trip because my phone camera has been working intermittently since I dropped it in the lake getting out of the kayak a couple weeks ago. But that picture is of the Kalama River, and it was beautiful. It was basically exactly the kind of river you want to be flyfishing on. I joined a couple ladies from the group, and we went to Beginner’s Hole, while other folks drove farther up river, or went up to The Big Red Barn and put in there to float back down to the bridge. I would like to do that with my kayak someday.

I had bought waders, wading boots, a flyrod, flies, and a new PFD with pockets for fishing (that will be useful in the kayak too), so I was all decked out. But I missed a crucial piece –  a walking stick. So I Tried to use an old paint-pole, which was about the right height, and sturdy, but I failed to properly secure it to my person. We waded upriver a hundred feet to get above the riffles near the parking area, and after I was in it about knee deep and fishing, I turned around to grab my stick and saw it floating downriver! Which is when I realized the value of a good walking stick!

After losing my stick I located an actual stick I thought would do the trick, and more securely tied it to my person, but shortly after that it broke in half, leaving me with half a stick, which was working in a pinch. Until I learned about why we should also have cleats on our boots, and I slipped on a rock and went down hard. I continued fishing, cautiously, but I knew a real walking stick would be first thing on my list when I got home.

I learned to cast at the class/casting clinic with the fly club a couple months ago, and I practiced in the backyard, and then realized that doing it in a stream was a completely different deal. The stream drags your fly downstream, and the wind pushes your line around in the air. It took a lot of casts to get the hang of pulling the line off the water and sending it where I wanted it to go! At one point while standing there resting between casts two big trout appeared right in front of me, did a taunting little dance, and swam away. Smug bastards!

But eventually we moved down to the beach and I had had enough wobbly wading for the day, so I got out of the wading get-up and just enjoyed fishing from the shore. There were butterflies everywhere! I was casting out to a rock in the river when something grabbed my fly but let it go, so I kept casting above that rock so it could drift over it, and sure enough, I finally caught a little 6 inch rainbow. I let him go of course, and shortly after caught a slightly smaller brook trout, and sent him on his way. So I was very happy to have caught anything considering it was my first time out.

After I pooped out I went up to join the club at a member’s cabin to have some BBQ and review our take for the day. Only one guy had got a steelhead at the put-in, and everyone else got skunked except for those tiny trout, which were plentiful. I hadn’t been expecting to catch a steelhead, so I was happy with my little catch. I had a lot of fun, and I can’t wait to go back out. That was a great way to start on a new hobby!