My bargain Miata came with a wrecked top when I bought it, so before last winter hit I put a junkyard top on it. It wasn’t a permanent solution, but it was cheap and it kept the car dry inside. Still, the more times I put it up and down, the worse the tears on it got, and it was very hard to put up when it was cold at all. I had resigned myself to getting a bargain top for it, and learning to install it on the frame myself, because I couldn’t afford to have it professionally done.

Saturday turned into a Miata day. Dave and I went to the gym, exercised and then hit the pool, and then as we were driving home enjoying the wind in our wet hair, I mentioned that the Miata should get an oil change, and Dave said ‘why not now?’ Since we had nothing else to do we headed up to Tire Factory and had them do an oil change, and then when that was done asked them to give it an inspection to see what needed to be fixed under there. I figure if you buy a Miata as cheap as this one, there’s bound to be something needs fixing, and I thought the ride was a little rough.
Well they came back and said not only did everything look fine, but it looks like a nice aftermarket suspension under there, so the rough ride is actually normal! Well, that’s a relief! Also the brakes were practically new so nothing to fix there. Basically we got away with nothing but an oil change and good news. And that’s part of why I trust the guys at Dick’s Tire Factory in Battle Ground, WA – they could have told me I needed new struts, that’s what I came in suggesting, and instead they sent me home happy!
Saturday night I decided to check Craigslist one more time before bed and in the auto parts section under Miata someone had just posted a cloth soft top off a wrecked 2005 miata with a glass rear window – for less than I would have to pay for a bargain vinyl and plastic top new! I emailed them immediately and went to bed too excited to sleep! The next day he emailed back and lucky me, I was first in line. We picked it up that afternoon, brought it home, and Dave helped me swap it onto Mr Miata. It only took us about 4 hours, even taking breaks because it was so hot! And the result… 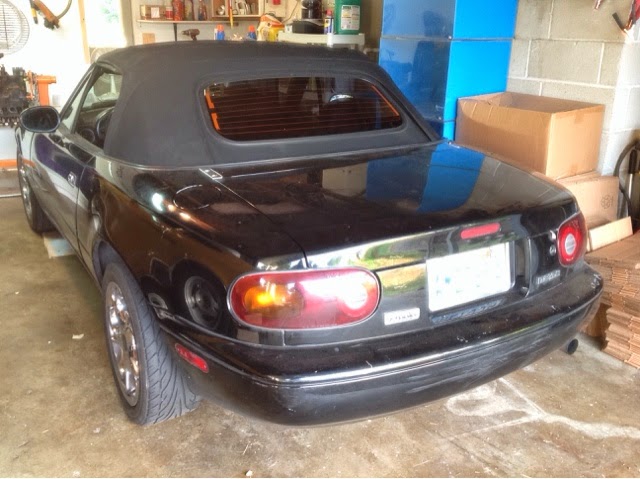 ..is FABULOUS!!! I did not think I would get a top this nice! It looks like new, and the glass rear window is so much nicer than the old plastic window. I’ll have to run new wires for the defrost if I want to hook that up sometime, because ’90 Miatas don’t have that wiring. This is just a super find, I’m so happy I was lucky enough to get it, and that Dave helped me get it all installed.

One thought on “Mr Miata gets a new top!”