Last night the dogs only saw Mary trotting around the field, and they completely lost their little minds! Barclay has no excuse, because he has been around sheep, goats and llamas since he was a baby. Navi has every excuse, because livestock is a new concept for her. Jack was the one that really went nuts, and he should know better by now too. His running around baying did nothing to help the other dogs realize the new critter was not a threat. So this morning I took them out one by one with a clicker and super yummy treats to introduce them to the pig.

The last time the dogs were in the pasture there was no pigpen there, so it shouldn’t have surprised me that as I brought Barclay out through the pasture gate, he turned and saw the pig ten feet away (behind the pigpen fence, but he didn’t notice that) and he reacted by RUNNING as fast and far away as he could go! He went about 50 yards out into the pasture before he even slowed down to look behind him and see if the monster was following. So much for hanging around to protect me!

Once he noticed the fence (and that I was still in the area), he got up the guts to come back and face his fears. So he came back and barked at the MONSTER. I ‘clicked for calm’ – whenever he’d stop for a breath, or look at me, I’d click and give him a bit of lunchmeat.

After a bit he started to relax, and there was less barking and more sniffing. Mary did not seem to be bothered at all. By the time we’d been out there a few minutes, he got up the guts to meet her nose to nose at the fence. I watched closely to make sure the interaction was good, and he got lots of praise and treats for being nice. 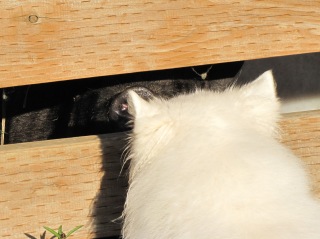 I took him in and waited a bit, then brought Navi out. I did the same thing, but this time Mary wasn’t up by the fence, she had gone back to bed and was sitting in her hay pile, still as a stone. Navi was sniffing around the outside of the pigpen, then Mary turned her head a bit (she was about 15 feet away) and Navi spotted her – and LOST HER FREAKING MIND! But with a few minutes of clicking and treating, she started to settle down. She’ll need more work with Mary up moving around though. I was actually glad Mary was setting still for this lesson.

For Jack’s turn, Mary had gone back to sleep buried in the hay, so he didn’t even see her. He just ran around sniffing the fenceline. I clicked him a lot for quiet or looking at me. He had a great time, and didn’t even see a pig. Again, more work for later, but a good start.

Working with the dogs individually was the way to go, there’s no way to settle down three dogs who are all going insane at once, they just build on each other. They all did very well one-on-one. Mary, for her part, was perfectly calm. Even after all that barking, I came out and she came right up to the fence for a scratch. 🙂

3 thoughts on “The dogs meet Mary”