Last week we tried a new antibiotic on Alki, because the vet thinks she has a kidney infection. Unfortunately it upset her stomach and she became reluctant to eat. Then the vet gave us some medicine to help her stomach, and some anti-nausea meds on Saturday, and she ate fine. But Sunday she threw up her food, and Sunday night she woke me up at 4AM throwing up. I tried to give her the medicine and a little bread to settle her stomach but she threw that up too. So I called the vet first thing in the morning and she said to bring her right in. She put her on IV fluids and took a urine sample to send to the lab to determine exactly which antibiotic she needs, and gave her a shot to settle her stomach. When we visited in the afternoon the vet said Alki had settled right down in her kennel and was resting. They had just taken her for a walk to go potty, and we could visit her if we wanted, but I didn’t want her to get all stirred up again. She said it was a good thing she was deaf because none of the noises around the busy vet hospital were bothering her, and although she had been nervous and shaking terribly when we brought her in, she seemed to be relaxing and just hanging out now. Tomorrow the vet wants me to bring her some of her favorite food and if she can eat it and keep it down she can come home tomorrow.

It’s so weird having her gone. It’s quieter around the house, and a bit more relaxing not worrying about her all the time, but I keep looking for her. I know this is what it will be like when she’s gone. It will still take some getting used to even though we’ve had almost three years to get used to the idea. But hopefully this crisis will pass and she’ll be home tomorrow and recovering from this little setback.

Meanwhile, out in the yard, I played with Barclay and gave him an egg to eat. 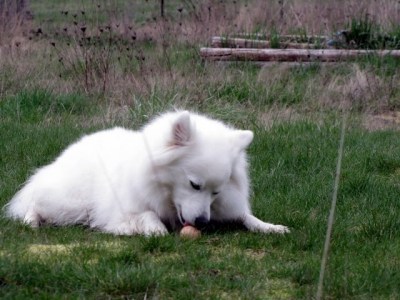 Jack didn’t get an egg, but he was curious about it. 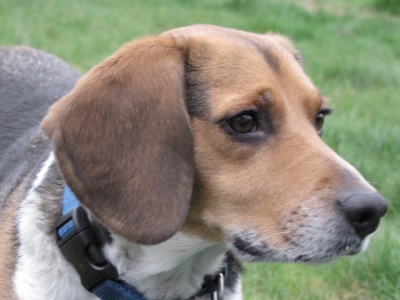 Instead I called him over and practiced some obedience while Barclay was busy with the egg.

So he got some jerky, which was just as good to him, he can’t figure out what to do with eggs anyway.