We had a little excitement around the farm this morning. To start with I had let the flock out to wander the yard, and they came up on the deck. So I had the back door open (screen closed) so I could hear them – I like the chicken noises! I was sitting there working on my laptop when I heard a fuss that was much bigger than the usual ‘hey, I’m pecking here, you go over there’ sort of squabbles they have. This was MUCH bigger! So I jumped up just in time to see a hawk flying off, and the rooster strutting around all ampped up! Apparently the hawk had gone for the hens, but the rooster protected them! So now he’s not just my handsome boy, he’s a regular hero!

So I got some scratch and enticed the flock into the covered pen in case the hawk came back, and they were all happy to go! Everyone was sticking pretty close to the rooster, and he stood outside the pen until everyone was inside then he followed. Once everyone was safe I went back to work. Then I heard another odd sound, a little ‘bok bok bok’ kind of noise, but it didn’t sound like a chicken – because it wasn’t! 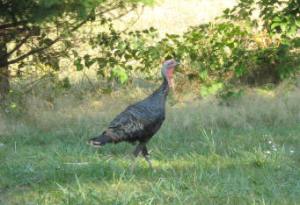 It was a wild turkey! 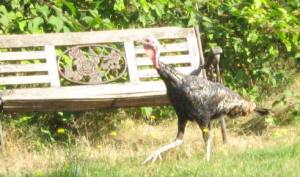 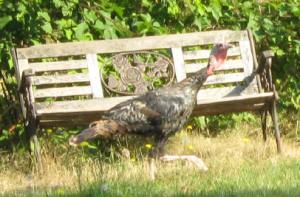 He/she was about three foot tall, look at it in front of that bench! That’s a BIG bird!

He hung around the yard for a couple hours, mostly down in the corner by the shed, where he could see the chicken pen, but he couldn’t figure out to walk around to the other side of the fence, then he could have gone in the orchard and got food and water that was sitting right outside the pen. Then he went on his way. It was cool to have a wild turkey drop by. I didn’t even realize there were any in our area, but when I told the FedEx guy about it he said he saw a big flock of them a little further north a few days before.

One thought on “Unexpected visitor”